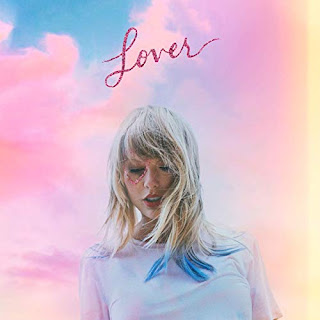 Taylor’s Swift’s seventh album, Lover, came out at the end of August to mostly good critical reception and (perhaps inevitable) high streaming and album sales. And Rolling Stone, in their October 2019 Taylor Swift cover issue, predicted that Lover will win album of the year in the coming Grammys.

I personally approached Lover guardedly, being a Swift fan since the second album, but perceiving a general quality dip in 2014’s 1989 (see my review here) and 2017’s Reputation (see my short review here, buried in my best songs of 2017 mix). To recap, my justification for feeling that the quality has lagged recently has nothing to do with her move to pop, the studio production, her collaborators, or her performance. Instead, I feel like her melodies/songwriting have become less well-crafted and the emotions she channels in her songs harder to relate to—I think at some point, she stopped writing from the point of view of an "everywoman" and started writing from the viewpoint of privilege (with some exceptions). In preparing to write this review for Lover, I went back and listened to hours of Swift’s previous material (which was great!), and while it was occasionally jarring when my iPod shuffled from the first eponymous album to Reputation, it was not the whiplash that I expected; I even occasionally had a hard time guessing which album particular songs came from. After this exercise, though, I stand by my previous reviews—of course, there are some great songs in both 1989 and Reputation, but there are a greater quantity of ho-hum songs than Swift's first four albums.

So, my question to answer in this review—is Lover a return to form? Or a continuation of the pattern of her last two albums?

Let’s tackle the emotional and “everywoman” aspect first. I do think that Lover for the most part comes from a place of privilege that is hard to relate to, especially “London Boy” (even Londoners have a hard time relating). Some of the best-written songs on Lover, however, take on typically Swiftian narratives: “The Man” and “You Need to Calm Down.” And while both focus on common critiques of Swift, I think a lot of people, especially women, can still relate to being subject to discrimination and harassment, and Swift has a humorous way of confronting these issues and giving us a window into her world. The rest of the songs on the album are easier to connect to than the songs on the two previous albums, especially “Soon You’ll Get Better,” a heartbreaking song about wanting a loved one's health to improve and “Death by a Thousand Cuts” about a small-town breakup (that isn’t Swift’s).

Moving on to songcraft, one thing I discovered going back through Swift’s large back catalog is that the song construction, removed it from the production, really hasn’t changed much in the recent albums. I think it would be pretty easy to re-write many of Swift’s newer songs as country, and  several would be improved by fiddle or banjo solos and a harmony above the melody. You can see proof of this in Swift’s recent NPR Tiny Desk Concert, where she plays stripped down versions of a couple of Lover’s songs.

And many of Lover’s songs are better than anything on Reputation; the aforementioned “You Need to Calm Down” and “The Man” are both well-constructed songs with important themes and catchy melodies in the verses and chorus plus good bridges. I often find the chorus of “I Think He Knows” stuck in my head. “Miss Americana and the Heartbreak Prince,” while not having a terribly interesting verse or chorus, won me over with clever bridge riffing on the high school cheer “Go-Fight-Win,” and ends up one of high points of the album (and of course, in an uncommon but totally-called-for song form, the bridge comes back later in the song, a la “Every Little Thing She Does is Magic”). There are also some interesting production choices in “Death by a Thousand Cuts” and “It’s Nice to Have a Friend” that I think set those songs and their writing apart. (Though forgive me for commenting on the one turkey in the flock—I agree with Lydnsey McKenna of NPRs description of “ME!”: “a half-hearted, half-baked not-quite-hit with a spelling interlude”).

Now, there is one exception where I have seen that Swift’s songs have changed over time, and not for the better. It is the overuse of one particular motif. This is the motif, which I am going to call in the “devils roll the dice” motif (from the lyrics in “Cruel Summer”), though I will show below that this motif has been used by Swift for some time before Lover:

(same note) 3-and-4-and-(up in pitch) 1. This is usually repeated at least two more times. The "Up" note sometimes is an indeterminate pitch, but is most often a 5th higher than the first note.

Here are the songs on Lover that use this motif or a variation of the motif (with timings, if you want to listen along):


Swift did not begin using the “devils roll the dice” motif in Lover—she repeatedly uses this motif in Reputation, too:


Once you start hearing it, it is everywhere!

Does Swift use of this "devils roll the dice" motif extend back in 1989, too? Yes, but only in one song: “I Know Places” seems to be the first time that Swift uses this pattern (although I discuss at length in my 1989 review how many of Swift’s songs in 1989 feature melodies of mostly one note, which may have been a precursor to this motif). But unfortunately, she seems to have stuck on it from that time forward.

I would like to say that the “devils roll the dice” motif is a Wagnerian-style leitmotif that borrows meaning from other contexts; but unfortunately, it is just lazy songwriting. Swift especially leans on the motif for her pre-choruses—a short, choppy phrase to build tension into the chorus relief. And it does work, which is why she keeps using it. And if she only used it occasionally, it would be fine. But she uses it and variations on it so much, the motif is getting old.

Maybe I am just being the person Swift is criticizing in “You Need to Calm Down.” But I do think avoiding this songwriting crutch in the future could lead to better songwriting. If Swift is reading this, I challenge her to write the next album without the “devil rolls the dice” motif! She did it on her first four albums, and she can do it again. Also, an occasional banjo or fiddle solo would make my day.
Posted by Peter Shirts at 3:12 PM No comments: 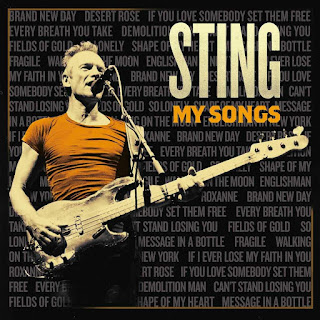 Today, for Sting Appreciation Day, I will quickly review Sting's latest album My Songs, which came out earlier this year, in March. Didn't know that Sting came out with a new album? Well, you not knowing is not that surprising—the album does not feature new material, but instead reworks classic Sting hits. How much does Sting re-work his material in My Songs? Unlike 2010's Symphonicities, the answer is not very much. Besides some slick drum beats, the synth equivalent of rainstick effects, maybe even some electronic rhythm accompaniments, and some short extra interludes, the songs are pretty much the same as the originals—the structure of each song, the vocal delivery, and even any lead instruments. One exception might be "Fields of Gold", which was re-worked to be more guitar-centric and folky, with a fiddle replacing the Northumbrian pipes (and a subtle, though inexplicable, drum machine); still, the structure of the song remains the same.

So, we appreciate you Sting! These are still great songs. But unless you are a die-hard Sting collector who needs every last version of something, I would recommend that you can skip this one.
Posted by Peter Shirts at 11:18 AM No comments: