Good idea: using musical examples ("All I Want For Christmas")

I spend a fair amount of blog space pointing out bad music journalism—specifically, journalism that fails to use musical examples to back up their argument. While Christmas isn’t yet the distant past, I thought I would share an article that effectively uses musical examples about a Christmas song. The article from Slate by Adam Ragusea attempts to explain why Mariah Carey and Walter Afanaseiff’s “All I Want for Christmas is You” has become a holiday classic, while so many other new holiday songs in the last 40 years have drifted into obscurity. While I’m not sure I totally buy Ragusea’s argument that “All I Want For Christmas is You” sounds Christmassy only because it uses chromatic-rich chords similar to Christmas standards in the 1920-1950s (for instance, there are other songs that use these chords that don’t evoke Christmas, so there must be something else going on, too; also, plenty of songs today feature more than 3 or 4 chords suggested here), I salute his use of theory and specific musical examples to prove his point and attempting to make the writing accessible to non-specialists. Here’s an example:


The song also includes what I consider the most Christmassy chord of all—a minor subdominant, or “iv,” chord with an added 6, under the words “underneath the Christmas tree,” among other places. (You might also analyze it as a half-diminished “ii” 7th chord, but either interpretation seems accurate.) The same chord is found, in a different key and inversion, in Irving Berlin’s “White Christmas”—on the line “children listen to hear sleigh bells in the snow,” specifically under the word listen, among other spots.

While many people don't know what a "iv chord" means, he does link it up sonically with an aural cue most people can recognize. Enjoy the rest of the article and have a happy new year!

Vocab: chords, minor, subdominant, half-diminished
Posted by Peter Shirts at 1:20 AM No comments:

Email ThisBlogThis!Share to TwitterShare to FacebookShare to Pinterest
Labels: Analysis

Every Christmas music lover should know about Alfred Burt. Burt is most famous for his 15 carols that he produced as his family Christmas card every year from 1942 until his death in 1954. Eventually, after Burt’s death, the carols came to national prominence and are performed all over the world.

Here is the Salt Lake Vocal Artists singing the most famous of the Alfred Burt carols, “Caroling, Caroling,” and “We’ll Dress this House”:


One Christmas season many years ago, I sung one of Burt's carols and was inspired to work on my own Christmas card carol. Several years later, for Christmas 2001, I sent out “The Ephemeral Carol.” I wrote the music and my sister-in-law Brooke Shirts penned the wonderful lyrics. I haven’t written any Christmas carols since, but I’ve had many chances to perform this one. It’s about how the events and objects of the nativity (the manger straw, the angels' song, Christ’s life on earth) were fleeting, but the work and words of Jesus Christ continued and will continue on. I’m posting it here with a creative commons license. Feel free to download and share. I hope you enjoy it. Happy holidays! 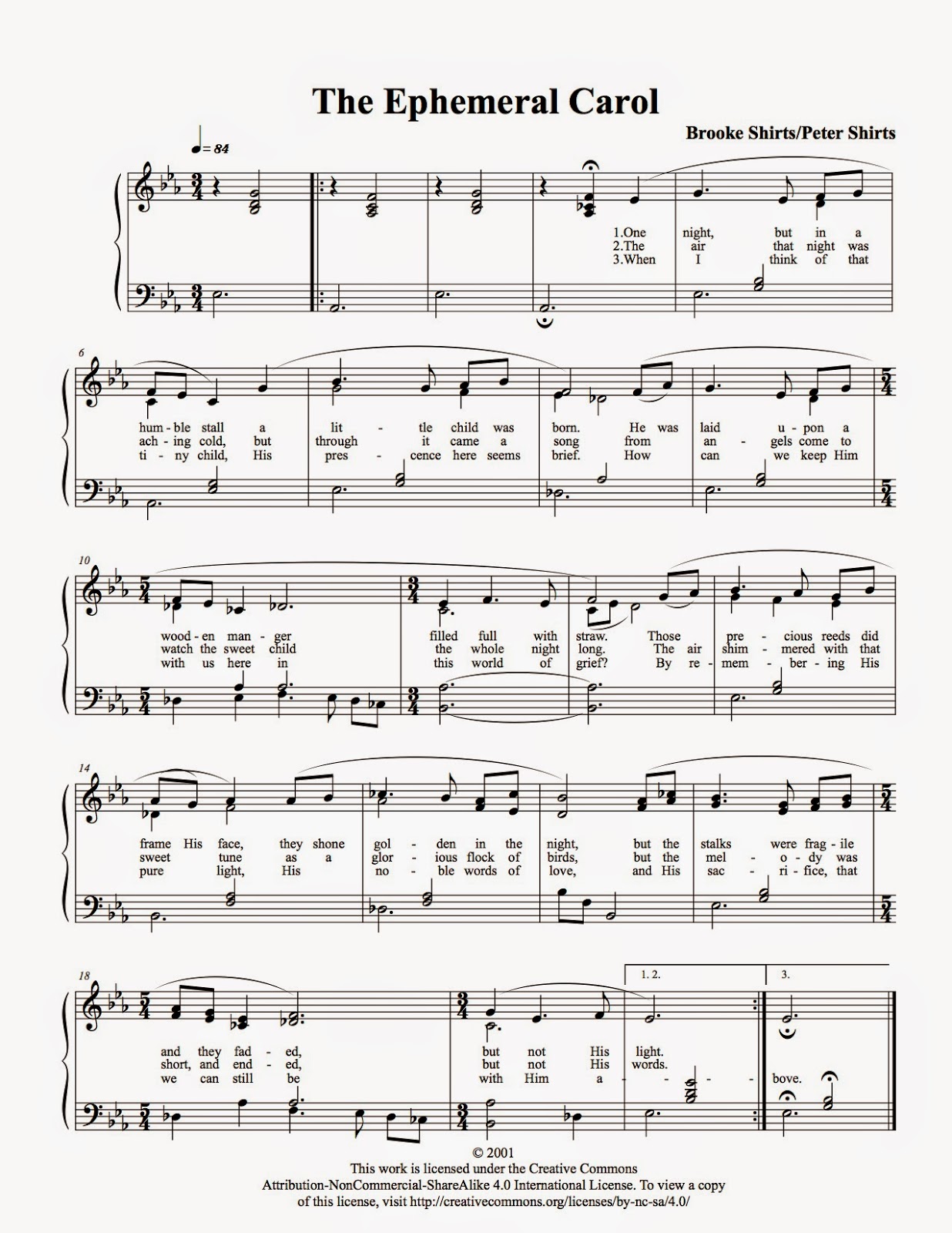 Why are so many good songs about bad behavior?

"The Dixie Chicks do not advocate premeditated murder"

I realize this post does not lend itself to writing about actual music, but there's a topic I’ve been thinking about a lot and deserves a treatment: there is a lot of good music out there featuring lyrics of people behaving badly. Why is that?

First, why do I care? Because many people reject songs simply because of the lyrical content. I myself become uncomfortable listening to some music. And while I respect someone's decisions to listen or not, I think portraying bad behavior in song can be more complicated than simple glorification of actions of dubious morality.

Although I should probably try and define bad behavior, a can of worms in itself, I’ll just simply say that it’s hard to define.* In fact, that is the point of some of these songs feature bad behavior—some artists write about bad behavior precisely because other people define the behavior as bad, and the artists disagree. These artists either create their songs to argue against the dominant narrative and normalize the “bad” behavior, or more commonly (especially in hip hop) present caricatures of the bad behavior to make fun of negative stereotypes thrust upon them. While listeners are free to agree or disagree with the artist’s opinion, I think a listener should at least recognize when an artist is motivated in this way.

Unfortunately, the line can be fine between critique and glorification. Songs can be easily misinterpreted because of hard-to-understand poetry or obscured lyrics; a song that the listener might think is glorifying bad behavior may be critiquing it. Or it may be ambiguous. And at some point, the author’s intentions may not even matter—what’s important is how the song is used by the listeners.** Also, sometimes artists seem to be having a bit too much fun behaving badly, undermining their original motivation.

Which brings up another reason why people write bad behavior in songs: in order to vicariously be a part of the bad behavior. More than any other type of passive entertainment, music invites the listener to role play. Music is a fiction (despite rap music being used as evidence in criminal trials) that invites participation, for example dance or karaoke, and the listener can be a part of the forbidden, tempting bad behavior without actually doing anything immoral. And because of music’s ability to heighten and prolong emotion, listening to the bad behavior in song form is more powerful than just reading or talking about it.

Another reason for the depiction of bad behavior could be money—songs about good behavior don’t necessarily make as much money as songs about bad behavior. Not only is this because people enjoy exciting and tawdry things sometimes, but also because depicting good behavior does not usually produce passionate art. Good behavior can be boring, or at very least isn’t a problem that artists need to solve.

I’ve thought about another reason for depicting bad behavior in music: simply presenting the bad behavior. However, I think this option is not possible with music, because of how music can elevate what is depicted. Music is not a language of neutrality.

Once we have parsed why (or our interpretation of why) the bad behavior is depicted, then we have enough information to decide if we should reject the song or not. Or we can just feel guilty for liking a song that is definitely glorifying bad behavior.


* I'll include "explicit" language in this definition, at least.
** Anyone heard "Every Breath You Take" sung at a wedding?
Posted by Peter Shirts at 1:42 AM 1 comment:

Bad X-ray: failing to describe music of "Since U been gone"


Every so often, NPR does a segment that analyzes a hit pop song to see how it ticks. This week, the lens turned on Kelly Clarkson's "Since U been gone," and I think failed in a spectacular fashion. Notice that the article never features musical descriptions or mentions what the music actually sounds like. Instead, it stumbles into two major pitfalls of music criticism: band comparison and genre labeling. The article name drops Pavement, Parquet Courts, the Smashing Pumpkins, and the Yeah Yeah Yeahs, as if those bands always sound the same in each of their songs, and if we could figure out which of their sounds we are suppose to hear in this particular song. The article genre labels this song as punk, indie, R&B, rock, emo, and pop. I know the point is that the song is a mix of many things, but these two tactics by themselves do not help the reader understand what is going on.


Chris Molanphy’s Soundcloud snippet embedded in the article (which is featured in the radio version of the article), however, actually gives a few musical specifics (I could have used more). The distorted, repetitive guitar intro is the indie-punk part, the electronic beat is the pop part, and the restraint in Clarkson’s big voice is the R&B part (which I think is a stretch, but fine). Don't get me wrong, band comparisons and genre labeling can be useful—but only when accompanied with some musical specifics to back up the broad, general brush strokes.

Besides the lack of musical description, I also think the article does a disservice in not mentioning the possible influence of Avril Lavigne. I'm not saying that Lavigne (and the Matrix) were the first to mix pop and punk, but she did, and I think we can draw a pretty solid line from them to Max Martin and Clarkson. Lavigne co-wrote the opening and title track of the album on which "Since U been gone" was released, Breakaway. The song "Breakaway" was originally planned for Lavigne's first album, Let Go (2002), and produced in advance of Clarkson's album. I think that Clarkson and/or her production team did a fair amount of listening to Lavigne's album in the interim. The relatively bare first verse of "Since U been gone" is followed by an electric guitar-fueled explosion with a powerful, bratty, punk-style, multi-tracked female lead—this formula was also featured on many tracks from Lavigne's freshman album, especially "Unwanted" and "Losing Grip." Some of the same brash, dissonant guitar effects are also present in both to herald the big chorus. Now, "Since U been gone" arguably has overall better production, better pop panache than those two songs from Lavigne, with a remarkable building in the complexity of the music from the beginning to end. But the similarities are there for all to hear. Can I prove this connection? No. But I think the musical elements and circumstantial evidence is much stronger for this connection than, for example, the Yeah Yeah Yeahs.
Posted by Peter Shirts at 11:40 PM No comments: