Album Review: HAIM, Something to Tell You

When I listened to HAIM’s 2013 first album Days Are Gone for the first time, I was enjoying myself too much to examine what the music was actually doing. 3.5 years later, Days Are Gone still sounds as fresh as it did when I first heard it—it still is in my album rotation and I keep hearing new things when I listen to it. I didn’t really understand the backlash against the album—for instance when Jim DeRogatis from Sound Opinions said that the album had "too many hooks,” to which I responded “Complaining that an album has too many hooks is like complaining that a novel has too many well-written sentences.” 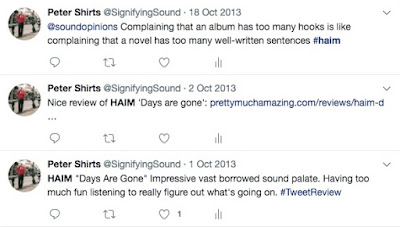 Now, HAIM has a brand new album, Something to Tell You, with plenty of new well-written musical sentences, along with some stellar and varied production. Many reviews have been placing this new album squarely in the past, the basic premise being: the music itself doesn't have much new to say, but it is good music. I think that is not quite right—Tom Breiham, in his Stereogum review, put it better, suggesting that "HAIM’s music doesn’t even belong to a genre" because it draws from so many influences and it constructs from these blocks meticulously and seamlessly. And what is new music, but reconfiguring things from the past? But like many music other reviewers, Breihan did not offer up many specific musical elements that were borrowed (though he did point out some little production gems). It's the comparative trap that so many music critics fall back to—using a band name comparison as a shorthand without explaining the connection, as if bands weren't multi-faceted.

Instead of taking time to point out the borrowings (which I'm sure are not easy to explain, anyway, and is why critics are avoiding doing it), I want to highlights a few great moments in the album that to me seem innovative:

Finally, a general comment about the album: a close listen reveals a lot of vocal manipulation and sampling—pushing voices high, or low, autotuned, sped up, thrown into low-fi, made to sound like a guitar or extra reverb added for just one note (this alone should place the album squarely in the present). There is so much variation, I can’t help but think that every decision was purposeful. The instrumental decision are similar—several times in the album thick textures will fall away for a dramatic effect, leaving an instrumental texture we haven’t heard before.

I don’t think this album has as many memorable moments or a well-written songs as Days Are Gone (and perhaps too many sudden endings), but Something to Tell You has musical as well as relationship message to convey and is still a great listen all the way through that keeps on giving. I recommend a listen.
Posted by Peter Shirts at 7:49 PM 1 comment: