Running Ahead: Sara Bareilles and 'The Blessed Unrest' 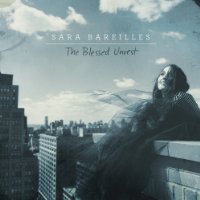 In a new attempt to review albums sooner after their release, this week I'm reviewing Sara Bareilles' third album, The Blessed Unrest. July is still last month, right? The album title comes from a quote by Martha Graham, the great American dance pioneer, and is really about moving on and continuing to change, instead of giving into routine and stagnation. Graham, who invented a whole new style and method of dance, really exemplifies this. Bareilles explores the theme throughout the record, both in lyrical content and musical direction.

The album has a surprising range of emotions, from the attempting cheerfulness of "Little Black Dress" to the longing of "Cassiopeia" to the emotional solidness of "Brave" to the unrepentant but mature love song "I Choose You." The emotions are more on the surface than in her second album, the mostly forgettable Kaleidoscope Heart. Perhaps The Blessed Unrest features a bit too many slow tracks, but even in those, Bareilles's story-telling singing keeps me interested. The varied musical textures are also a leap in a new direction. Partly, Bareilles's channeling some Sara McLachlin with her vocal and instrumental production, especially in "Satellite Call," but mostly it's just exciting and new. Bareilles's piano is still present, but is mostly backgrounded, a far cry from the piano prominence of Little Voice.

Besides the now-ubiquitous anthem "Brave," I think "Hercules" is really the most exiting track. I'll use it as an example of what I think works in the rest of album: varied texture, continuity, and added musical meaning. She starts the track with some solid, open-fifth chords that are about as prominent as her piano playing gets this album, but strangely sparse enough to prompt questions. Bareilles's smooth voice then appears on top, with inspired string writing that mirrors the voice. Then, just before the verse ends, the beat drops away and we get a moment of calm decorated by a delicate rolled piano chord. I always get a rush when the chorus hits after that calm, with the additional movement in the strings and the high vocal backup. Throughout the song, the words and emphasis are crystal clear and never overstated. The bridge really brings something new to the song, but we also finally get an expansion of the calm music from before the first chorus. When the solid, open-fifth chords return in the final moments of the track, I realize that while this sound also began the track, I haven't heard it in a couple of minutes. And it prompts me again, what does this sound mean? Its solidness probably hints at a strong warrior (as in the title), but its disappearance may hint at something deliciously more complex, such as hinting that the wisher/singer might not get their wish. Also, "Hercules" is a great song for jogging.

I think The Blessed Unrest is really a terrific album, and shows that Bareilles can keep reinventing her music, as the title suggests. I do, however, miss the unabashed, energy filled piano playing from "Love Song" and "King of Anything." In the future, I hope we hear a lot more of that combined with the creativity on display in this album.

What did you think of the album? Did you like Bareilles's new direction?

By the way, I listen to more new music than I have time to review in depth, so I've started doing #TweetReviews @signifyingsound, as you can see from the new tweet widget on your left. I'm a bit conflicted over reviewing 30-60 minutes of music in only 140 characters, as I basically have to leave nuance at the door, but I've decided a one-line review is better than nothing.

New Music Books I Wish I Had Time to Read #3

In honor of school starting up again, here's my third installment of New Music Books I Wish I Had Time to Read. As always, this summer I've been busy processing new books for the music library (about 100 per month), and I note the ones that I think would be interesting to read, had I the time. Maybe you'll find something you want to explore more! Here are my picks, listed in no particular order:
Is there any book in this list you are excited about? Is there a music book you've seen or read recently that you want to add to this list?

Posted by Peter Shirts at 9:49 AM No comments:

Email ThisBlogThis!Share to TwitterShare to FacebookShare to Pinterest
Labels: Books to Read

Recently, John Oliver of the Daily Show took on the use of music on news shows, especially CNN. The trend, he explains, is for cable news shows to run dancy, beat-driven background music on top of serious stories. Here's the clip (4.5 minutes):

Oliver's argument hinges on two ideas: 1) musical appropriateness, something that we take for granted and is actually very subjective; and 2) hearing background/foreground, meaning that our minds can determine that the spoken words are more important than their surrounding music.

On musical appropriateness, have these programs (in Oliver's words) "sucked the weight out of news" by using this music? Well, given our cultural connection with the type of music played, this is probably the case (and both the songs we heard on the "Rock Block" were definitely pop and not actually rock music). On the other hand, this type of music fits the aesthetic of CNN's morning show, which is all about being upbeat and full energy.*

On background/foreground, having music that can support words, say in a movie where someone is giving a stirring speech, can add weight to a message. But it's also possible to have music that's overpowering or distracting so much that it takes away from the message. What about Oliver's examples? I think their ability to be backgrounded differed in each case. Some of the music played, though beat-heavy and perhaps not the appropriate moods, was very easily backgrounded. The backgrounded music had thin textures and usually did not have words. Were any of those example soundtracks cacophonous, as Oliver claims? Well, some of them (especially those with words) competed for our attention perhaps too much, but for the most part, I would say they weren't just noise that was thrown out there; instead, they were an attempt at painting a certain aesthetic. Perhaps the mixture of the music and speaking might be labeled cacophony All the same, the "Marching Band News You Can Barely Hear" is pretty funny, because that music and visual is not easily dismissed.

Perhaps these cable networks need to hire a better music supervisors/librarians, which I guess is not on the top of company's most wanted lists. As we see here, however, these positions can make a difference.

What do think? Was this music inappropriate, or competing with our attention with the news? Or are these music supervisors doing a good job? Should morning news shows just not share depressing news?

As always, please come over to the blog to leave comments! Also, I've been ramping up my musical tweeting, so if you want a piece of that action, follow me at @SignifyingSound.

*On the other hand, one might argue that the Daily Show's sarcastic style sucks the weight out of news. I think Oliver would argue that what they do actually adds weight to the news—they are truth tellers in a world of spin.
Posted by Peter Shirts at 7:04 PM 2 comments:

Email ThisBlogThis!Share to TwitterShare to FacebookShare to Pinterest
Labels: Money

Sometimes, critics make fun of songs because of how repetitive the lyrics are. For example:

Yes, inane lyrics exist, but the truth is that these lyrics are not as repetitive as they look like on paper, because the music changes when the words repeat. And changing the music alters (slightly, in this case) the meaning of the text. By just changing the music on the repetition of a lyric, you can add meaning to the text, alter the text's significance, or even completely change the text's meaning.

Looks pretty repetitive, doesn't it? Well, it's the chorus of a song, and the (text+music) is meant to stick in someone's head. To stick effectively, we need to hear it several times. But as listeners, we don't want to hear the same thing exactly. In this case, the melody of the first three phrases begins the same (although the harmony differs), but is different at the end of the phrase. What does that do? Well, first, it emphasizes this phrase. Second, it lets the listener ponder on the meaning of the words—if we hear it three times, it must be important. Third, it gives the resolution ("and she don't care") more punch because we had to wait so long for it. And fourth, the melodies of the three repeated phrases sound progressively more frantic and worried. If I were to try that using only text, it might look like: "She's got a ticket to ride, oh no, she's ready to go away from here, she's on her way out the door RIGHT NOW—because she doesn't care about me anymore." As you can see, the point is made more effectively—and memorably—using music.


The pattern of repeating phrases in "Ticket to Ride" is very similar to another common music/lyrical repetition convention: in most blues music, the first lyrical phrase almost always repeats. The second time around, though, the melody and the chords are different under the same words, creating a strong emotional reinforcement and giving the third phrase (the response to the previous lyrics) more weight. It's kind of like waiting for the punch line of a knock-knock joke.